Nintendo 3DS
The first spin-off and the first console-exclusive game in the series, RollerCoaster Tycoon 3D (abbreviated as RCT3D) is a 2012 game released solely for the Nintendo 3DS portable game system. The game was developed by n-Space and published by Atari. The legal section on the bottom of the official website also credits Chris Sawyer, so it is likely that he was working on the project as well, or was at least its licensor. It was scheduled to be released around March 2012 in North America as Nintendo World reported.[1] This date was missed, however, and the release date was then set to May 22, 2012.

RollerCoaster Tycoon 3D was finally released on October 16, 2012 in the United States, and in Europe and Australia on 26 October 2012[2]

RollerCoaster Tycoon 3D features a "Coaster Story" mode, in which the player begins the game as a young teenager eager to become a roller-coaster designer. The player's father, who manages a theme park, asks Chappy to mentor the player.

This mode is part tutorial and part narrative-driven challenge. Chappy guides players through the tutorial, indicating how to interact with the game world. He also offers exclusive building challenges.

Coaster Creator is a mode in RollerCoaster Tycoon 3D that allows players to create a coaster design and save it onto an SD card. A player will start off with $999,999. The landscape is flat and only one roller-coaster can be built at a time, with no other rides permitted to use. Since no guests can arrive, this mode is strictly a coaster creation tool. However, track limits are the same and one can save up to 9 roller-coasters per SD card.

RollerCoaster Tycoon 3D was mostly a large disappointment and gained negative feedback because of a bad storyline, lots of removed elements that were available in previous games and a track limit that does not allow coasters to be very long.

Elements that were cut from RollerCoaster Tycoon 3D include, but are not limited to: 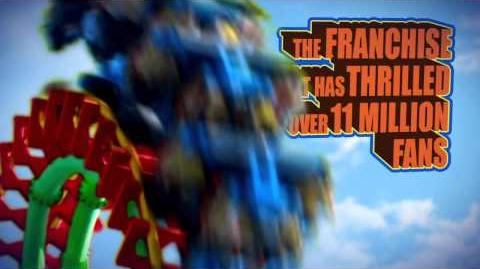