One of the biggest problems with Diamond Heights is the accessibility to the left unused part of land, after the park entrance along the Indiana (Jane) Railroad. Park expansions should be aimed there, but it's very difficult to access to this place other than creating a large bridge from the Shortstuff's Slide ride, and a train stop on the Railroad. The first thing players should do is focus all Research & Development funds to shops & stalls first in order to unlock Drinks Stalls. The second thing, then, being switching funds towards Thrill Rides and Gentle Rides. This will allow the player to build attractions such as go-karts and water slides before the end of Year 3. Then, building some shops and stalls is an absolute must, as the park initially lacks them entirely. Then, and only then, should the player diversify the variety of rides in the park.

While the four roller coasters in Diamond Heights are more than enough to satisfy the guests' needs, a fifth roller coaster might be needed in order to reach the objective, although this should only be done as a last resort.

Shortstuff's Slide may need to be changed to single ride per admission mode, as some guests may ride again and again while complaining about being on the ride too long, making people in queue wait longer. Even though this will lower the excitement rating, it's an easy choice to do. Players can also increase the ride's capacity by allowing 5 riders on it instead of 4. Both these options can be done while the game is paused. A good idea regarding this very ride (one of the very few in the game that doesn't require a queue line) would be to move it altogether, towards a 2*3 spot anywhere else, and keep that spot ready for another 3*3 Thrill Ride such as the Twist, the 3D Cinema, or the Top Spin. Although Go-Karts still could be placed there and be successful, this would take some solid time away, which might prove catastrophic for new players in the long term. Three solid choices for moving this ride would be the flat spot under the Agoraphobia/Claustrophobia lift hills, the flat spot of land right by the end of Arachnaphobia, and the other spot of land hidden between said coaster and Grimble's Gallopers.

Tower rides (Observation Tower, Launched Freefall & Roto-Drop) should always be placed inside of a coaster's helix if possible : this will boost both rides' excitement ratings quite considerably.

Players must also — this is particularly important in RCT1 — lower the inspection time of Agoraphobia/Claustrophobia to 10 minutes. This is due to the fact that both these roller coasters, as their trains enter their respective stations at high speeds, can crash due to a station brakes failure either the second or third years. Placing two mechanics patrolling at the exits of both rides is a very good prevention method for these crashes, as is modifying the ride to implement brakes (or block brakes in RCT2 or OpenRCT2) or otherwise reduce the speed of the trains as they enter the station platforms.

Players facing this scenario in RCT2 or OpenRCT2 are also advised to add all the logs available to the Snake River Falls ride, which will also play its part in buffing the guests happiness. Out of all the rides, only Symmetrophobia/Doppelgänger requires no true action apart from setting one mechanic to patrol it constantly, which should seriously reduce any risk of a crash on it.

Once all this is done, the scenario's quite easy to complete : building new rides & rebuilding the non-tracked ones from scratch to rebuff the park's value, with building a brand new coaster if the scenario's requirements are still not met by June 31st year 3, being the last resort option.

Like the PC version, it also has the same issue but the objective is much higher than the original. The only solution to this level is to build more rides or stalls. Two to four roller coasters along with many gentle rides (it doesn't matter as there's no decrease effect on the same rides). A few additional security guards, cleaners and mechanics will prevent the park rating from dropping twice if vandalism, litter, or broken rides are remained there longer. 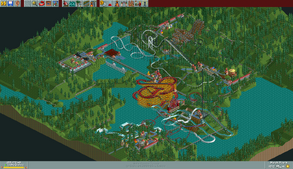 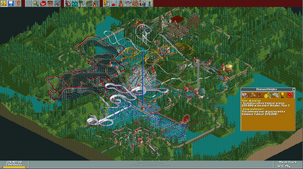 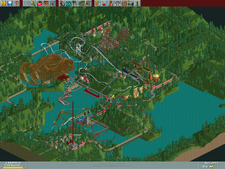 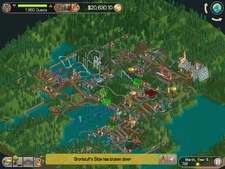