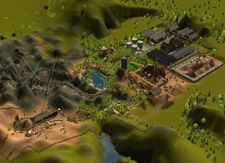 Look out, unamusing amusement parks! A movie studio has cast you in the role of a superhero. Not for a movie, but for the daunting task of updating its aging back-lot park without ruining its pedigreed heritage. You're the producer, the director, and the star of the show. Can you deliver the blockbuster this studio wants?

The scenario guide can be viewed here.

You can put Cami O in a lake or where there is no path connected to the main park and wait. When Cami O leaves the park, she will have never encountered litter.